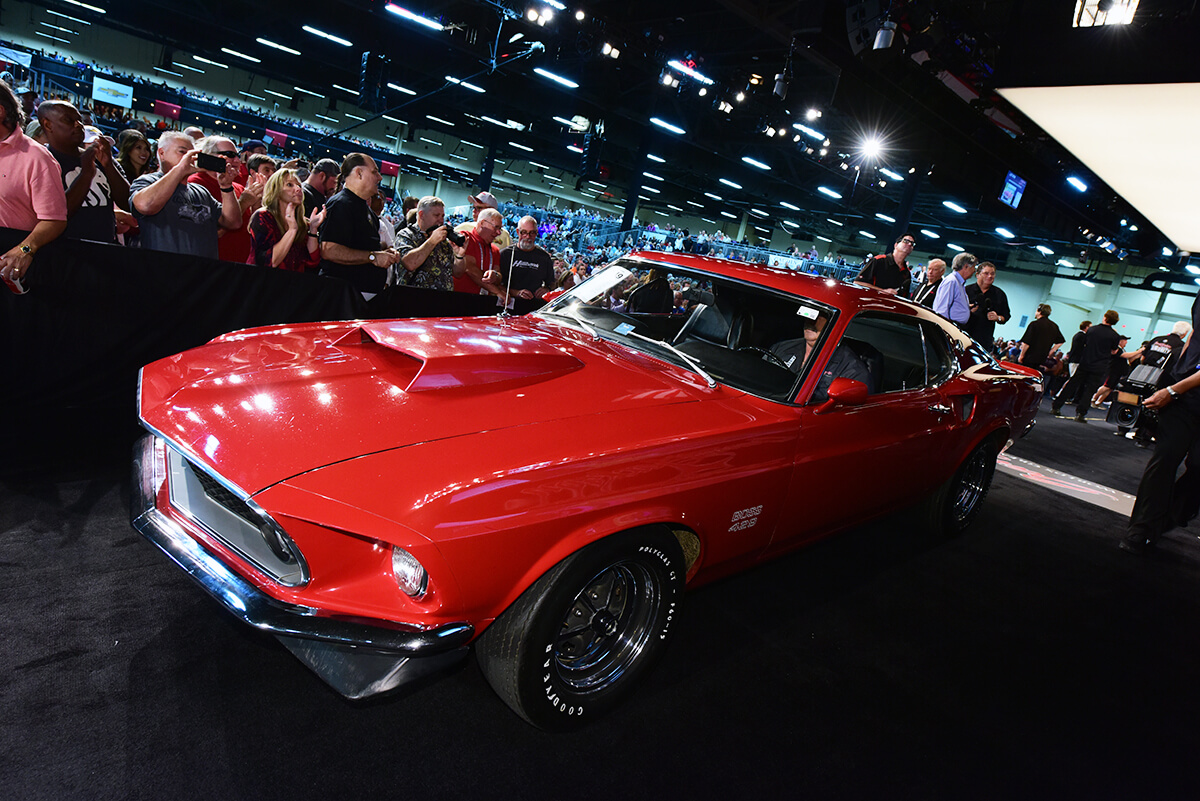 By Jaron ColeOctober 6, 2019No Comments

Barrett Jackson Las Vegas is the last stop on the auction circuit for 2019 until their Scottsdale, Arizona show next year. As always, we like to compile a list of the top 10 Mustangs sold at auction. This year Classic Recreations brought a few Mustangs that made it on the list including their Boss 429 Recreation that was unveiled at SEMA last year. There were also some unique Mustangs that were auctioned such as a Saleen Prototype! Continue reading below to check out the full list.

This 1969 Mustang Fastback has been had a complete nut and bolt restoration with no expenses spared. It’s powered by a Ford 514 cubic inch V8 big block crate engine. The motor includes Super Cobra Jet aluminum heads, Demon carburetor, long tube headers and a solid roller cam. All that motor is mated to a custom built C6 automatic transmission with Gear Vendors electronic overdrive.

This is a fully documented 2005 Saleen Extreme S281 R&D Prototype finished in Speedlab Yellow over a Dark Charcoal leather interior with black graphics. t’s a true one-of-one car with 21,717 actual miles, most of which occurred during factory testing, and is powered by a 4.6-liter V8 engine backed by a 6-speed manual transmission. Saleen did not release the Extreme model to the general public for purchase until 2006. This Saleen was used as the promotional Extreme model, which was unveiled at the Chicago and New York auto shows, generating pre-orders for 2006 production. This #0001E car is not only the first 2005 Extreme prototype but also the only remaining prototype in existence for the ’05-09 lineage.

This 1966 Mustang has been modified to a fastback body and is powered by a highly modified 302ci FAST fuel-injected engine with an 8-port fuel system and all stainless engine accessories, backed by a TREMEC 5-speed manual transmission.

This custom 1968 Mustang Fastback was built for SEMA by Classic Recreations. It drives like a modern Mustang but delivers that nostalgic “American Muscle” look!

This rotisserie-restored 1969 Mustang Mach 1 is powered by a 351ci V8 engine mated to a 4-speed manual transmission. It was completely stripped to bare metal and done to original factory specifications, including the correct markings on the suspension, body and engine compartment. It’s finished in its original shade of Black Jade Poly, while the underside was done in factory-correct red oxide with the correct factory exhaust system.

Another mean muscle machine crossed the block at Barrett Jackson Las Vegas this year. This 1969 Boss 429 re-creation was built by Classic Recreations for SEMA 2018 and is the first Ford-licensed Boss 429 ever created. It features a fuel-injected 546ci Ford engine equipped with KAASE HEMI heads and intake, paired with a TREMEC T-56 Magnum 6-speed manual transmission and Centerforce clutch.

GO, BABY, GO! This is an officially licensed Eleanor Tribute Edition build that comes with genuine Eleanor certification paperwork, Eleanor body VIN plate and emblems. It was born a factory A-code fastback and was one of 154 built with the T5 option package, as documented on its framed Marti Report. Under the dome of the Eleanor hood sits a fresh rebuilt 428ci V8 engine, which is backed by a smooth-shifting factory Toploader 4-speed manual transmission.

The Mustang that sold for the most this year at Barrett Jackson Las Vegas was this 1967 Ford Mustang Shelby GT500CR from Classic Recreations.