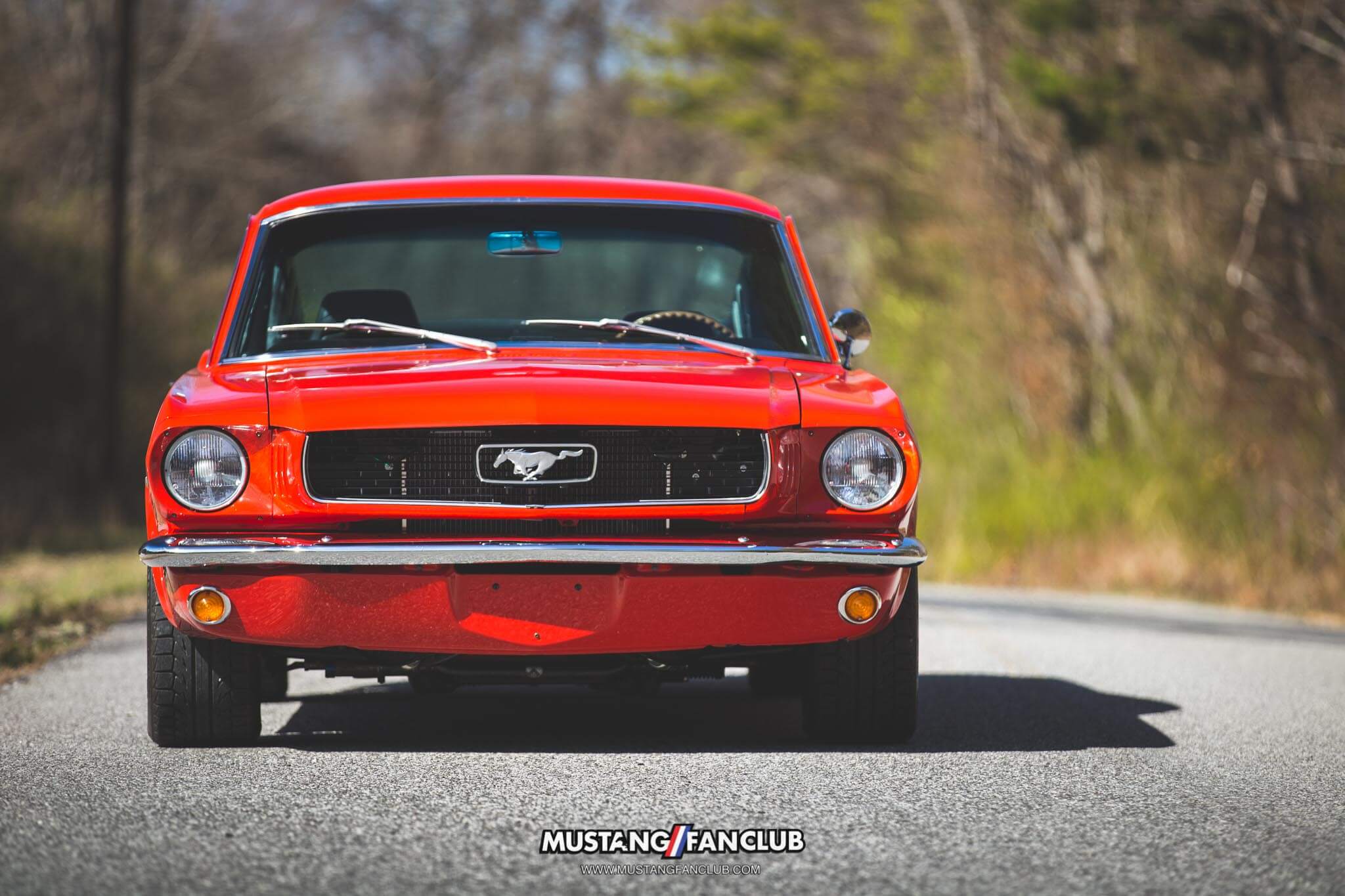 One thing we have noticed while being in the Mustang community is that everyone seems to have a “Mustang story”. You can talk to pretty much anyone and I guarantee you they can relate to the Mustang in some way. Zach’s obsession with Mustangs began at the age of thirteen. He told us about a very specific moment in time that ignited the fuel inside of him.

That moment was when his good friend’s brother got a new edge Saleen for a senior graduation present.  It was black, low and sounded amazing.  I’d never seen anything like it.

Fast forward 10 years and Zach is fresh out of college. He finally has some spare pocket change to spend. One day, Zach was visiting an auto repair shop where he spotted the 66′ in the back corner of this shop. It belonged to one of the mechanics there and after pestering the guy for months, he finally said, “bring me the money.”
A very reasonable sum of money exchanged hands and he drove it away. He thought he’d just do on-the-spot repairs and drive it around.  This idea only lasted for a couple of months until the wiring had a short and nearly burned down the car while inside his friend’s garage.  The rest was history, so began the disassembly and rebuilding process!

Zach wanted to keep the “classic” look, but still give it a modern yet clean presentation that clearly says something isn’t typical about this Mustang.  To achieve this, he deleted many of the badges and trim pieces that garnished the outside.  At least 80% of the car is original Ford pieces, preserving heritage and presenting far better than any reproductions. The total build took about three years from start to finish.

“No power steering and no air conditioning, I built it to drive!”

“The drivetrain is all business”, says Zach. With a fully forged engine, stage 3 port/polish heads, Chris Alston chassis, and a Strange Engineering rear end, this Mustang isn’t just all show. Zach mentioned to us how the build process had its ups and downs. One example he gave us was, “we built the engine at our store in Blue Ridge, Kayes Auto Parts. Our foreman and my friend, Keith, spent the better part of a summer helping me build the engine.  We had to pull the crank 4 times and regrind it, each time ordering new bearings.  It was immensely frustrating: one step forward, two back.” After everything all came together he said, “There is no better feeling than seeing your vision come to fruition right in front of your eyes.”

The interior is mostly original. OEM pieces include the glass, steering wheel, mirrors, switches and trim. Zach chose to modify a few things inside the interior which include a set of Corbeau LG1 seats, Hurst shifter, Lokar pedals and shifter trim, and a JME instrument bezel with Autometer Phantom II gauges. He wanted to preserve the original experience, while making tasteful and functional upgrades as needed.
“The original AM radio is still in the dash, for when you need to catch NPR while catching 2nd!”, he mentions.

“Restoring a classic is something every enthusiast should experience in their lifetime.”

If you enjoyed this article please feel free to share it with your friends. It’s not just a car, it’s a lifestyle! #MustangFanClub