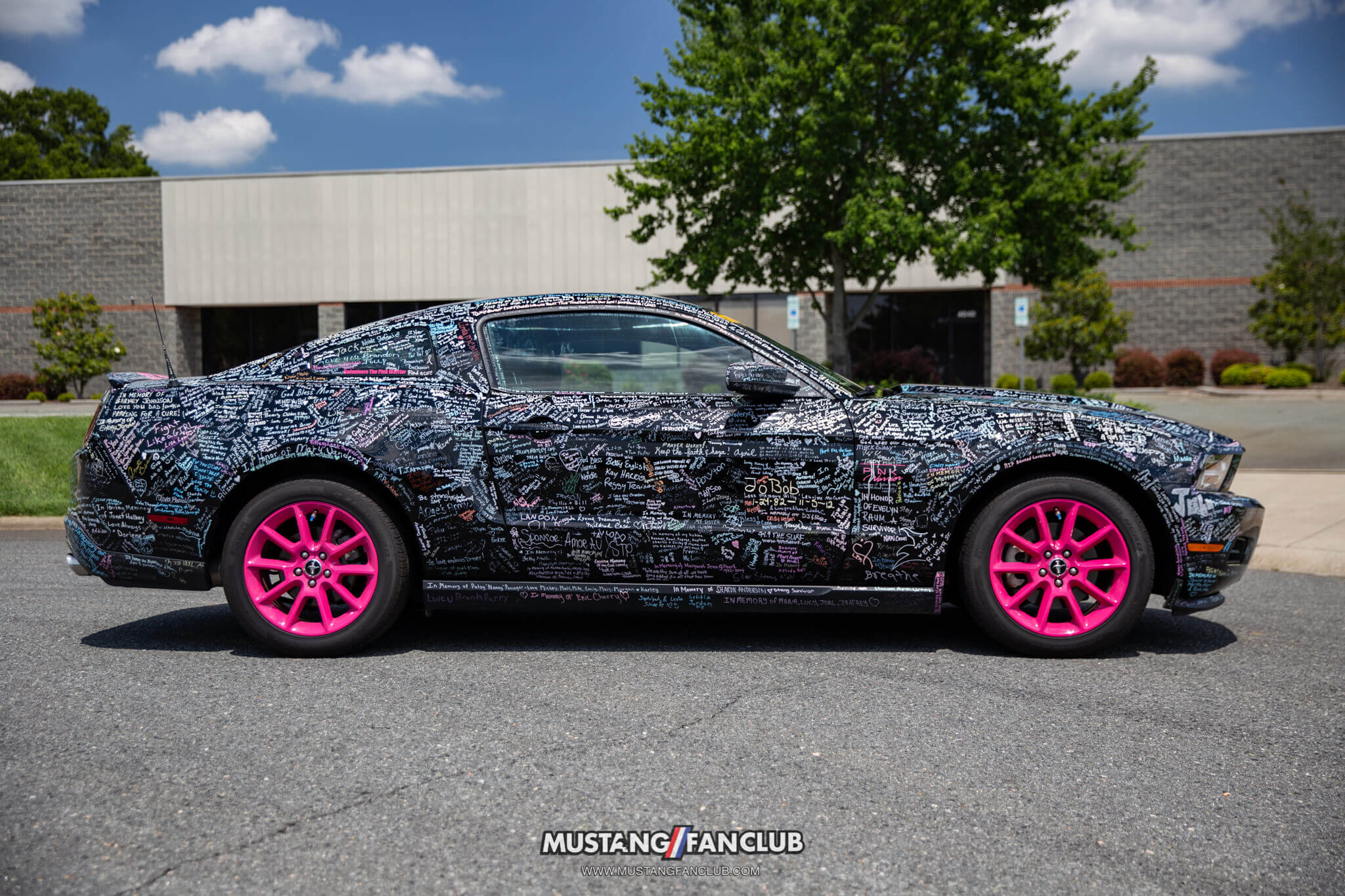 By Jaron ColeJanuary 4, 2019No Comments

This 2012 Mustang is a rolling cancer awareness tribute to anyone who have been affected by any type of cancer. Gwinnivere is now owned by Tindol ROUSH Performance located in Gastonia, NC. The Mustang was previously owned by Michelle and Les Dutcher. The first time I walked into Tindol’s showroom I remember seeing this Mustang with thousands of signatures literally on every inch of this Mustang. Exterior, interior, engine bay, trunk, trunk liner, side splitters, front bumper, etc.

I spoke with Ludger there and he told me of Michelle and Les the previous owners. Let me share their very unique story as to how this Mustang acquired thousands of signatures by people who have been affected by cancer.

A 2012, Shadow Black, Mustang (Gwinnivere) started out as a birthday present from Les Dutcher to his wife Michelle. Michelle has been an advocate of cancer so she decided to add a set of pink stripes to her new Mustang. Tragic news strikes and Michelle found out she has breast cancer. With her now being a patient and an advocate, Michelle and Les began showing their Mustang at local car shows.

Thankfully, she won her battle with breast cancer but their journey has only just begun. Their 2012 Mustang would then become dedicated to everyone who has been affected by cancer. After a few signatures were added to the exterior of the Mustang and a fresh new set of pink wheels, Gwinnivere as we now know was born.

Cancer has no bias. It’s not only the patients that struggle with the illness. Family and friends may not wear the scars but many carry emotional pain with them while their loved ones battle cancer or succumb to it.

After they saw how much hope Gwinnivere brought those that came in contact with her, Les and Michelle decided to travel to different cancer treatment centers throughout the country. Along the way, the Mustang has become a message for hope and remembrance to those who are currently battling, survived or have passed because of cancer.

Each name on the Mustang represents a life touched. Les and Michelle asked anyone who has faced any type of cancer to sign their Mustang or sign on behalf of a loved one.

After years on the road, traveling across the country to spread cancer awareness and hope to those affected, it was time to trade her in. Les and Michelle took Gwinnivere to Tindol ROUSH Performance to get a new 2015 ROUSH RS.

After Les and Michelle had their new ROUSH RS, it was time for the guys and gals at Tindol to decide what they would do with Gwinnivere. Lyle Sturgis battled cancer a few years ago so the story behind Gwinnivere really resonated with him.

The team at Tindol decided to carry on the tradition Les and Michelle had started just a few short years ago. They are honored to continue spreading hope and relief to thousands of individuals who have been touched by cancers devastating grasp.

Gwinnivere the cancer awareness Mustang now has a new home inside a cozy showroom in Gastonia, NC. If you’re ever in the area, feel free to stop by and check it out for yourself.

While Lyle Sturgis, the Crazy Mustang Man, was visiting the Museum had an opportunity to sit down and chat with Lyle to hear his story. Check out the full video interview below!