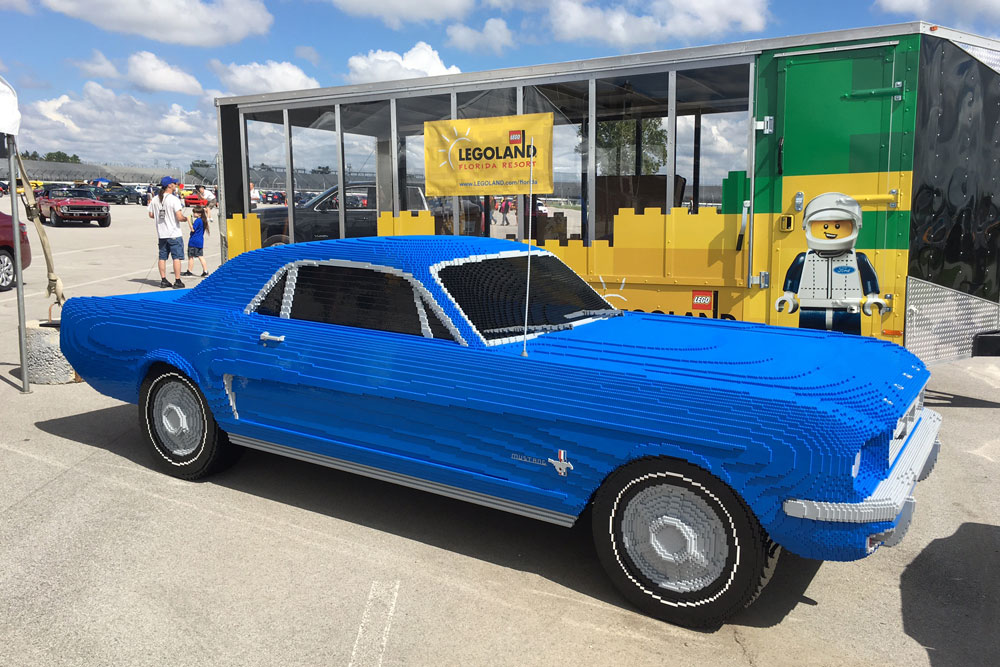 Life Size 1964½ Mustang made out of LEGOS! #BRICKPONY

A skillful team of Master builders came together to create authentic-like “1964½” Mustang V8 coupe. This showpiece consists of 194,900 LEGO bricks and DUPLO bricks mounted on an aluminum chassis weighing in at a whopping 1,712 pounds. With over 1,200 hours dedicated to this project labeled as the #BrickPony, the 1:1 replica measures more than 15 feet in length, practically 6 feet wide and 4 feet tall. This creation does not only replicate the size of the 1964½ Mustang, but also embodies functional headlights and taillights along with a virtual horn and carries real sounds of a mustang engine.

Legoland’s #BrickPony made its introduction at Indianapolis Motor Speedway September 1st, 2016 in addition to Mustang Club of America’s 40th anniversary celebration. Legoland Florida Resort public relations executive, Chloé Boehm, shares her excitement for the event. “We’re delighted to show off our version of an American Classic during MCA’s 40th anniversary celebration. We can’t think of a more perfect place to reintroduce the car that redefined cool in a fun, creative way.” Gale Halderman, an original team member of Ford Motor Co. that designed the Mustang in the 1960s, along with NASCAR legend, Richard Petty, both gave their signature of approval in an interior space under the model’s trunk.

This creation has made its permanent residence on October 1st, 2016 outside the Ford Driving School attraction at Legoland Florida Resort replacing the previously built Ford Explorer. The 5 year old life-size LEGO Explorer will soon be refurbished and displayed elsewhere announced at a later date.