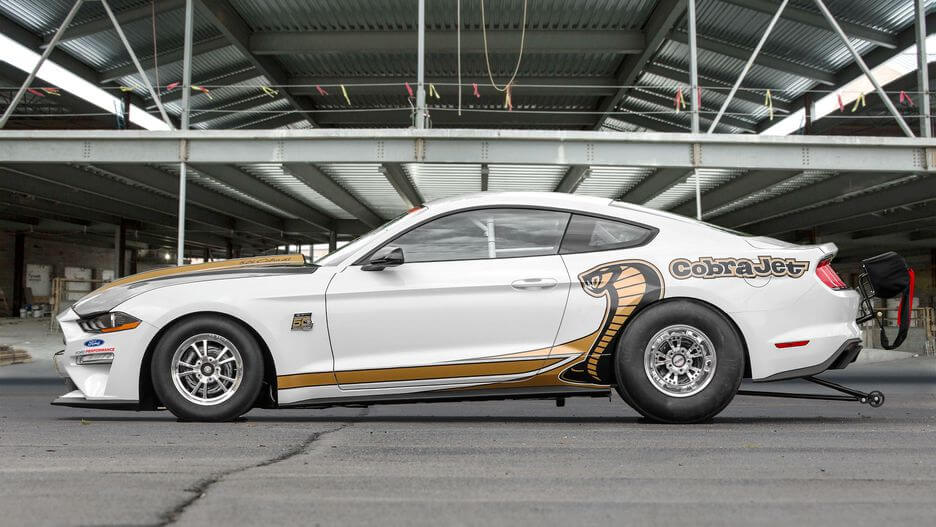 Today, August 16th, 2018, Ford has officially released the fastest version of the Mustang… The Ford Mustang Cobra Jet. The Cobra Jet nameplate has always been associated with the drag strip. Making its debut at the ’68 NHRA Winternationals, the Cobra Jet dominated the competition. In 2018, the Cobra Jet will continue to dominate on the drag strip.

Engineered for the track

Live your Mustang life a quarter mile at a time

The 2018 Mustang Cobra Jet is the most powerful and quickest Mustang to roll out of the Ford factory. Powered by a 3.0L Whipple supercharged, 5.2L engine, Ford Performance says it will complete the 1/4 mile in a blistering mid-8 seconds at 150+mph. With all of that power, Ford needed to put the power to the ground efficiently. Some unique parts used on the Cobra Jet include: a 9-inch solid rear axle, 2-way coil over shocks with adjustable ride height and a low-drag brake system from Strange Engineering.

Mustang Cobra Jets MSRP start at $130,000. Slightly more expensive than the last iteration of the CJ. Production is limited to only 68 models to commemorate the first year of production (1968). You will have two color options, Oxford White and Race Red. The gold graphics package shown in the photos is the 50th Anniversary Commemorative package which can be ordered on your Cobra Jet.