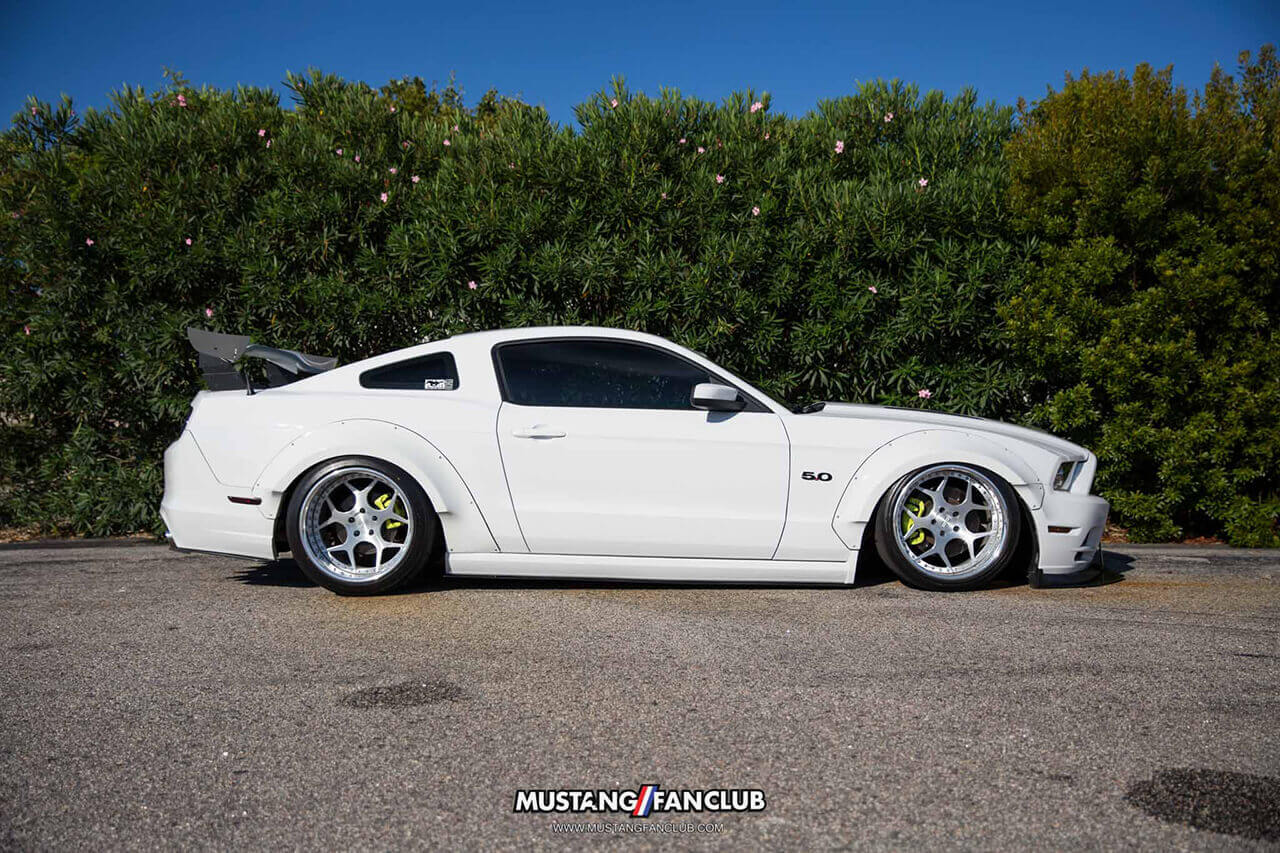 You might be wondering what the word “ruined” means when we mention Jarrett’s Coyote? This is the term that came to mind when he was deciding how to mod his brand new Mustang. Let us tell you more about Jarrett’s #Ruined Coyote!

The Mustang community has become very diverse over the past few years. The strive to stand out in different ways has become more apparent. Jarrett Barber did just that with his Coyote; stood out!  From domestic to import and back to domestic, Jarrett has owned a few different cars and has grown to respect all makes and models and doesn’t consider himself just a “Mustang guy”. Even though his Mustang is possibly his favorite car that he’s owned. A buddy of his traded a Pontiac G8 GT for a 2014 5.0 and that’s what caught Jarrett’s attention with Mustangs. He was very impressed with how the car performed compared to the older model Mustangs and had to get one for himself.

That’s when he decided to get a brand new 2014 Mustang GT Premium. Just like anyone else who gets a new car, he said he wasn’t going to do much to the car, maybe just some wheels and exhaust. Well that didn’t last very long! He threw on some coil-overs, wheels, exhaust, and a few simple enhancements, and started taking the car to events and meets. After seeing that several other Mustangs looked similar to his, he wanted to do more to stand out. That’s when the “Ruined” idea came into play. Having experienced the import scene before, he was always a fan of that style of modding. At the time, not many Mustang guys were into “stancing” their cars. That’s when Jarrett decided to get an air suspension kit from Airlift. He was very happy with the new setup, but still wasn’t 100% satisfied. We all know that when the mod bug bites, it bites hard!

In early 2016, Jarrett got word that Trufiber was designing fender flares for the S197 body style. He got a hold of Junior at Trufiber and worked out a deal with them for a set of flares. Once they finally went into production a few months later, Jarrett received his flares and it was time to start cutting. Mentally, taking a grinder and sawzall to your car isn’t really the easiest thing to do. Jarrett measured everything up and marked his cuts and stood back and stared at the car for a few minutes. He got the courage and just went for it! He then got the flares painted to match the color of the car and installed them. This is when the doubts started to arise. Jarrett said the car looked terrible. But he knew he needed wider wheels, and as soon as possible!

Jarrett called up Mike at CVT Designs and discussed his feelings about the car and he recommended some Art In Motion custom 3 piece wheels. He was not a fan of running spacers on his car so these had to be wide. Matt with Art In Motion worked out a deal with Jarrett for a set of MA12 wheels, 19×11 front and 19×13 rear. The car sat for months and waited on the new shoes to be made. Just 5 days before his big trip to Mustang Week in Myrtle Beach, Jarrett got his wheels! He went straight to the shop and installed some fat Nitto INVO tires, backed the car out, aired out the suspension, and fell in love. He couldn’t believe that it was his car and that it was finally done.

Over the past few years, Jarrett has learned a lot. One thing he learned is that there isn’t another community in the car world that’s better than the Mustang family. He enjoys meeting new people and seeing what they’ve done to their cars along with getting to know them on a personal level. It’s pretty crazy how social media and a common passion for a car can bring people together, including companies. Sure he has gotten a lot of negative comments towards what he has done to his car to stand out from the rest, but he doesn’t let it bother him.

“Do what you want to do to your car, don’t let someone else’s opinion or approval stop you from doing what you like. At the end of the day, it’s your car and no one else’s. That’s the beauty of making a car yours, it gives you the opportunity to express yourself through your vehicle”. – Jarrett Barber

What is the Saleen SA-30 Mustang?