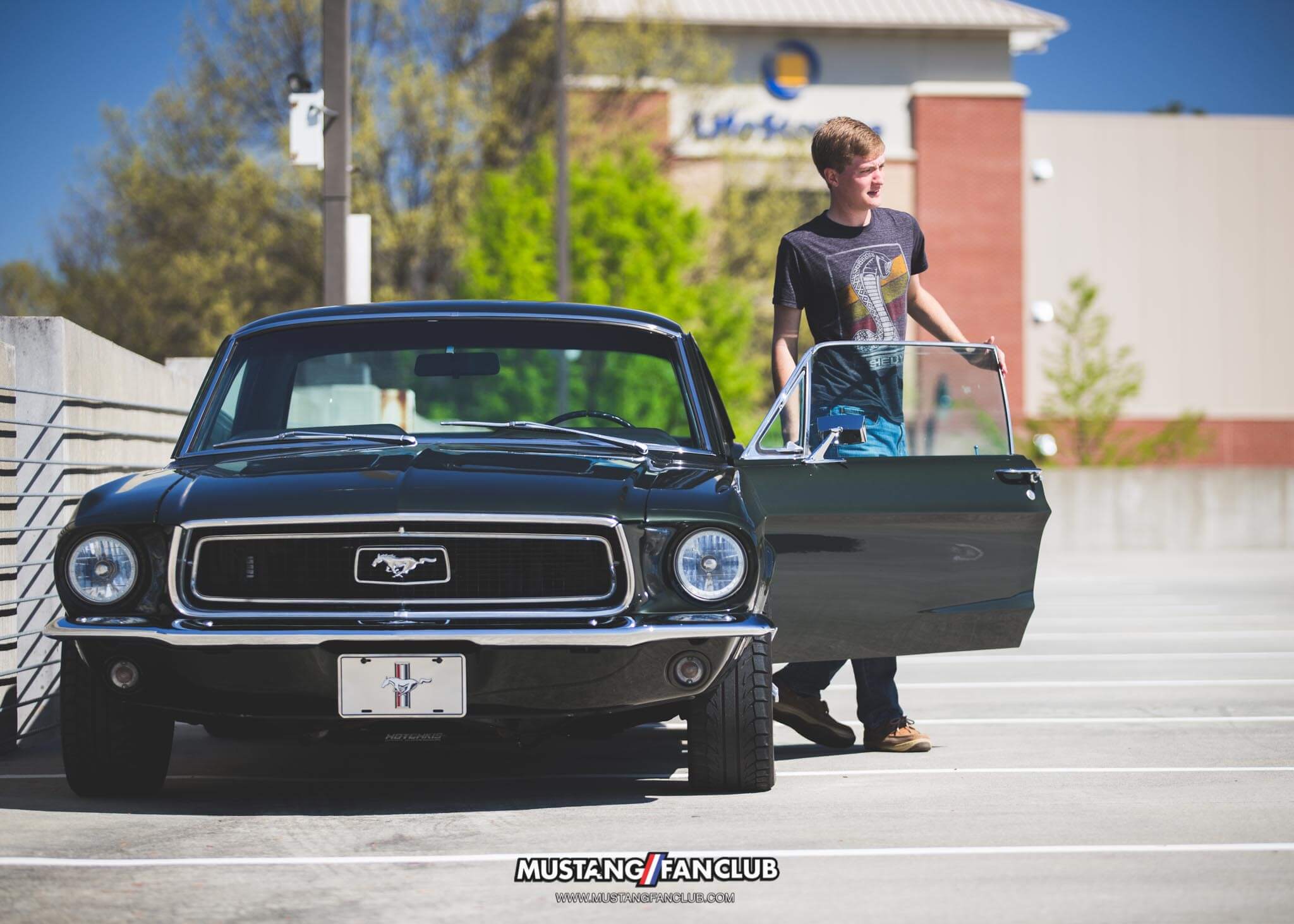 People hold on to good cars. Great cars become a part of a family’s legacy. It takes a special kind of car to transcend history, and few other cars mix blood and oil like a Ford Mustang. John’s car, a 1968 C-code coupe spent 14 years on the road. The car found its way into a junkyard on the south end of Fulton County. This was the fate of many 60’s and 70’s era muscle cars. Combine a fuel crisis with advancements in engine technology and vehicle safety, and most people were eager to get rid of their 60’s and 70’s era muscle cars.

A few people had an eye for these vehicles in the 80’s, and one person was John’s grandfather. He was a Ford technician, building flat-head V8’s and served as the town mechanic. One day, while going to the junkyard to look for parts for a customer’s car, he spotted a ‘68 Mustang on a rollback. The car had been involved in a minor front end collision, but was mechanically sound. Knowing that his daughter, Lorrie, was needing a car for school soon, he decided to bring her down to see if it was something she wanted to work on to make her own.

The answer was YES!

John’s grandfather and Aunt Lorrie began work on the car straightening and repairing the damaged metal, including the addition of a GT hood. After sorting the steel out, Aunt Lorrie wanted the factory Meadowlark Yellow paint switched up to a maroon color from a 60’s Thunderbird.

Aunt Lorrie drove her maroon Mustang all throughout high school. Upon enrolling at Georgia State, she and John’s mother, also a Mustang driver, decided to start taking MARTA to class. One night they were leaving the university when they returned to find Lorrie’s car stolen! A call to the police and a quick search revealed that the car was only a few blocks away.

The thieves had decided to push the car away after not being able to start it car due to a hidden kill-switch. In their frustration, numerous body panels were dented and windows were smashed. The thieves were caught, but justice doesn’t do body work, so John’s grandfather and Lorrie parked the car and began to plan repairs once again. However, at this point in Lorrie’s life, things are moving fast with school and her professional career. Her and her father abandon repairing the Mustang, parking it in their barn in south Fulton.

Aunt Lorrie will never be forgotten

Fast forward a few years to 1996 and tragedy strikes the Bogenschutz’s family with the tragic murder of Aunt Lorrie. John is just two months old at the time, and with every loss there is a place for remembrance and rebirth. The years would go by, and John would spend his childhood days riding go-karts and playing in the loft of the barn.

“I would always find myself stealing glances at the Mustang.” Being a gearhead runs in John’s family, and when John turned 16, his dad nearly turned him into a Camaro driver, saying “My dad had owned several Camaros in his life and it was just what I grew up seeing.”

After a looking at a few salty Camaro projects, he decided to approach his grandfather about his aunt’s Mustang. “I’ll probably never get to working on the car in my lifetime,” his grandfather said, and the project was willed down to John.

The car was a diamond in the rough, and started after only a few hours of tinkering. The restoration process started immediately, with John funding it by working two jobs during his free time outside of high school.  Stripping the car down to bare metal revealed the ghosts of its past, a few accidents hidden with bondo and four layers of paint.

The only body modifications to the car were side scoops and a GT/CS decklid from Mustangs to Fear. With the car’s metal how he wanted it, John sent the car to Warner Robbins to get painted.

Once the car was back from paint, John began to place the trim back on the car, change all the fluids and service parts, and clean up the interior. As with most older cars, vital parts had to be replaced, such as installing a new gas tank and rebuilding the carburetor. He had an exhaust system fabricated, and equipped the car with Hotchkis Sport Suspension, Wilwood Disc Brakes, and American Racing VN427 Wheels and BFGoodrich Tires.

“Lorrie” was back on the streets again for his freshman year of college, and since then he’s been taking it to shows and taking it on regular drives around town. The only issues have been standard maintenance items, such as re-coring the radiator, adjusting the carburetor, and replacing power-steering lines. Very impressive, especially considering the car is still running on its original engine and drivetrain.

John says, “This is my car forever, and something that serves as a reminder of my Aunt for me and my family.”

“You’ve done a great job, John, and know she’d be proud of you and what you’ve done with her car.” – Mustang Fan Club